REMEMBERING AND TELLING OUR STORIES

DE LA RAÍZ is a project dedicated to gathering and sharing stories of the Latinx communities of Southern Oregon. Through personal interviews, research, and visual art, this project hopes to center and uplift our voices while challenging stereotypes and national narratives of who we are. Stories from this project will be distributed through an online archive, local exhibits, and print journals.

The Use of the Term “LATINX” or Latinx American IN THIS PROJECT:

The word “Latinx” a word in common usage as of late, is a gender-neutral alternative to Latina or Latino that moves beyond the gender binary. The “X” is a way of rejecting gendered words, “Latinx” or “Latinx American” is a geographical term, also referring to people of Latin American descent or cultures. Some people don’t identify with this term because as an umbrella term it may obscure more specific ethnic and/or racial experiences. 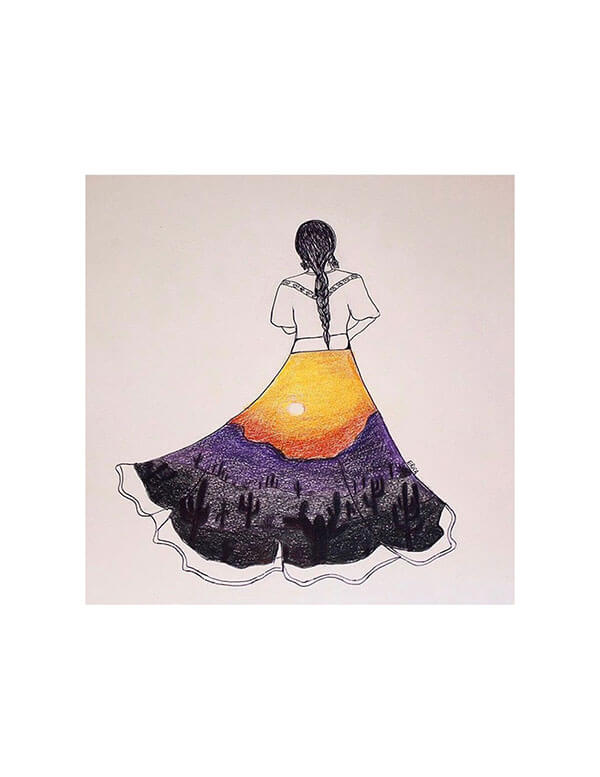 Why Are We Doing This Project?

Our vision with this project is to tell our stories—the stories of our Latinx community members for the future generations to know who they are and where they came from.

We recognize that we are living on Indigenous lands that have their own story of origin. We want to honor the Shasta, Takelma, Modoc, and Klamath people. We want to ensure that by telling our own stories we don’t erase their stories and names. 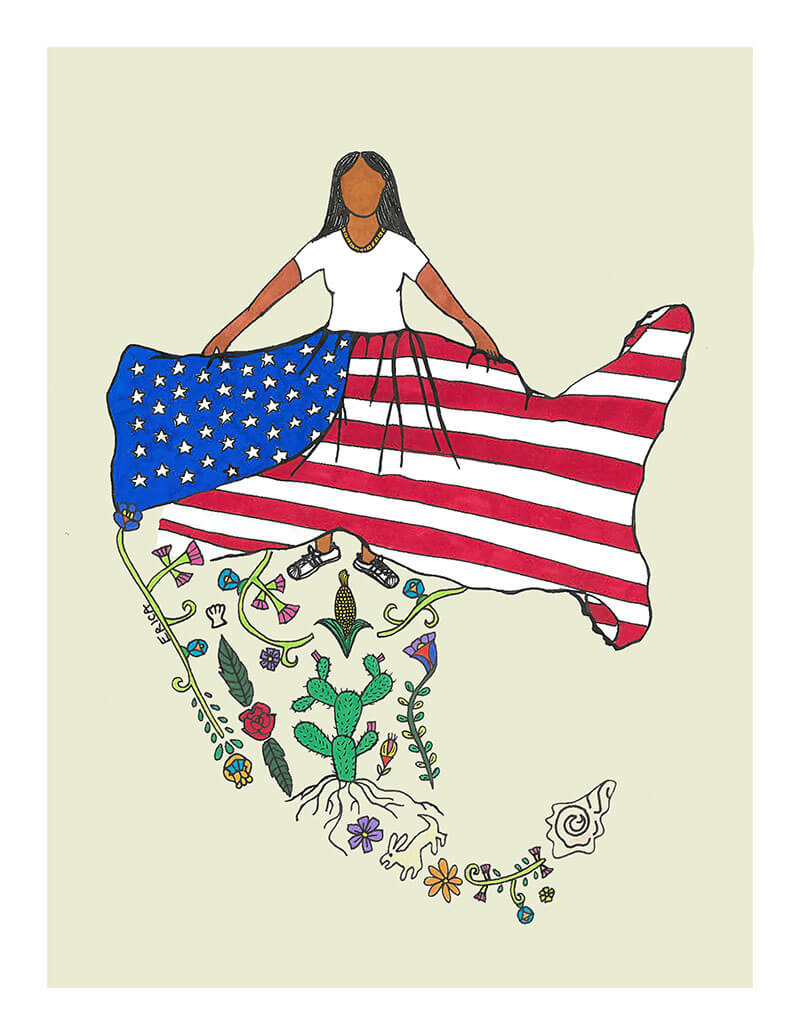 Thank You To our Sponsors

We are very thankful to our program sponsors, The Hearth and Oregon Community Foundation who are supporting storytelling within the Latinx community of Jackson County, Oregon. Funded through OCF’s Latino Partnership Program, the grant hopes to strengthen diverse relationships within Jackson County as well as train local Latinx leaders in the art of community storytelling. 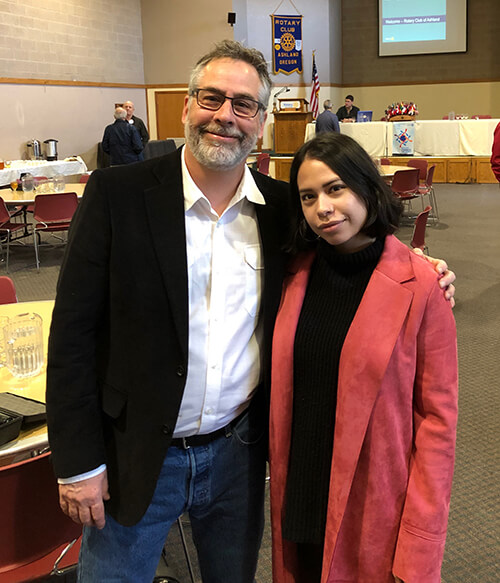 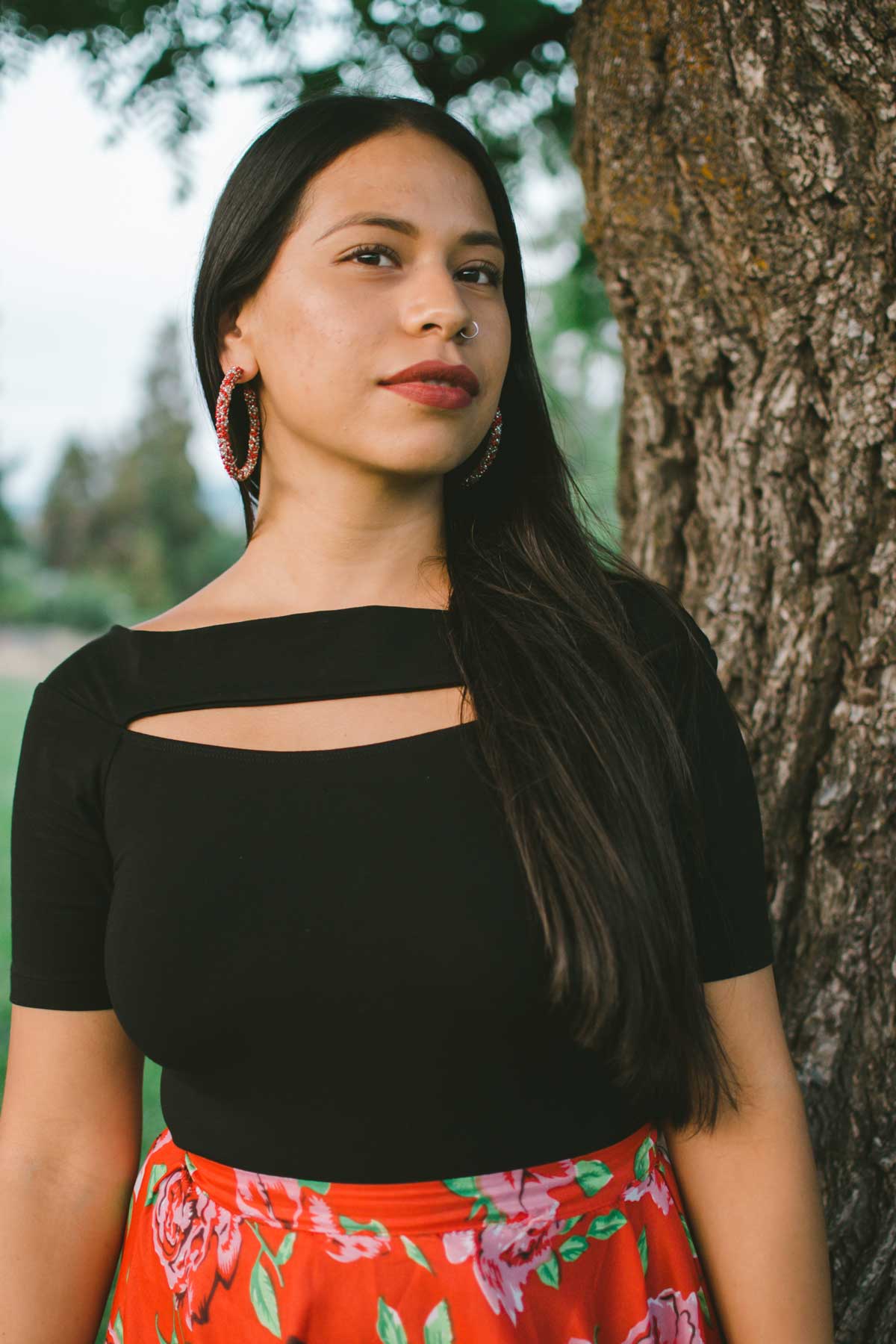 Erica Alexia Ledesma is a first-generation xicana born and raised in Southern Oregon with ancestral roots in México. Erica is a visual artist, youth mentor, and community organizer currently based in Takelma Land (Medford, Oregon). Her work centers visual art and story sharing to build community and address her cultural identity.

In 2018, Erica co-founded a project called Noche de cuentos, which works with the Latinx members to craft and share their story in the community. In 2019 Erica partnered up with The Hearth– becoming the director of the Latinx Story Project creating a project called De La Raíz (from the roots) that focuses on gathering stories and sharing them online.

She believes in the power of telling and reclaiming our stories as a means of remembering and spiritual healing. Erica received Bachelors degrees in Ethnic Studies, Cultural Anthropology and Spanish from the University of Oregon. But she would say that a lot of her experience comes from being chismosa and curious. 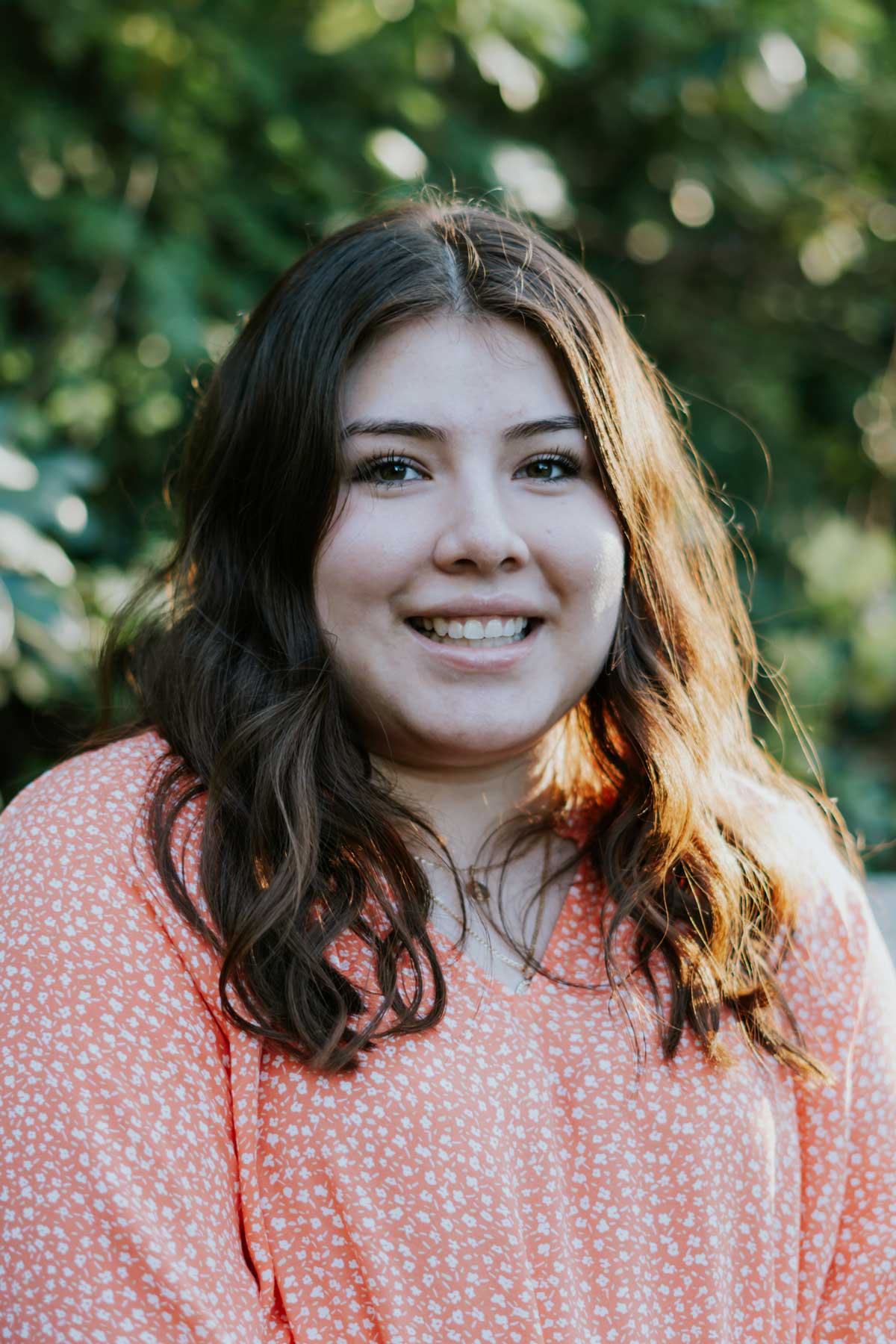 Diana Ramos Alonzo emigrated from México in 2010 and has lived in Oregon since then. Currently serves as the Social Media Coordinator for Project de la Raíz. She is a fourth year undergraduate student at Southern Oregon University, majoring in Spanish Language and Culture and minoring in Art.

Diana is described by many as a passionate activist that works for the wellbeing of her community in Southern Oregon. Her work includes being the SOU Latino Student Union Interim President, the 2020-2021 Multicultural Affairs Senator for ASSOU, and member of various committees at SOU focused on diversity and inclusion.

She has been a workshop presenter at Cesar Chavez Leadership Conference, Semana Sensacional de Verano, and Raíces Unidas Conference. She is dedicated to advocating for the Latinx community. Her personal experiences enable her to establish a strong connection with the people she works with and pushes her to work harder to achieve her personal goals and the ones that Project de la Raíz has. Diana’s commitment and tenderness are crucial characteristics and skills that allow her to work to create a positive impact in her community. 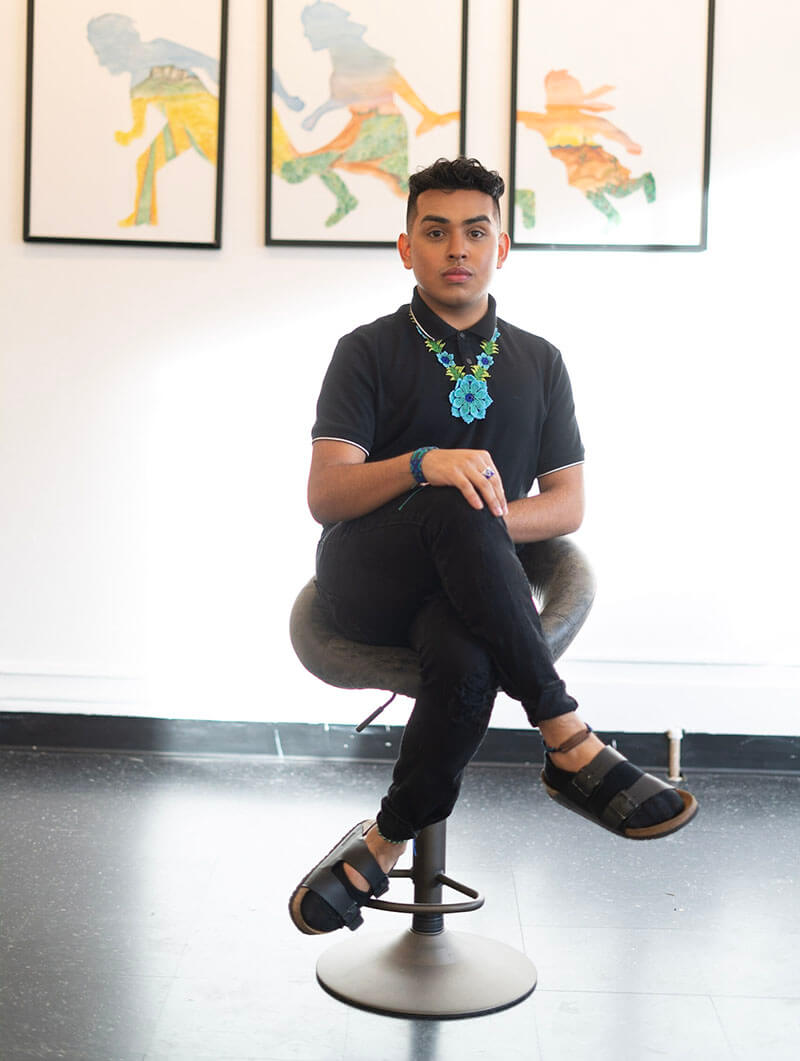 Jesus Cortez is a Chicanx, Scholar, and son of immigrants. Born in Ashland and currently living in Medford, Oregon. Recent graduate from SMHS, Jesus hopes to pursue a career in healthcare as a Registered Nurse by obtaining a bachelor’s in Nursing and Spanish at SOU. “De La Raiz” is a project that has interested him from the beginning. Working on this project is going to allow him to learn about his own community and be able to share their lived experiences; we need a platform for the voices of the underrepresented communities.

Jesus is the eldest of three and will be the first in attending college in his family. His parents and past family generations have lived in southern Mexico in the state of Michoacan. Jesus feels lucky to have spent some of his childhood growing up in the land of Michoacan where he was able to learn local stories and cultural practices. One of his passions is seed beading in the style of the Huichol culture, an indigenous beading style mostly practiced in north-central Mexico. 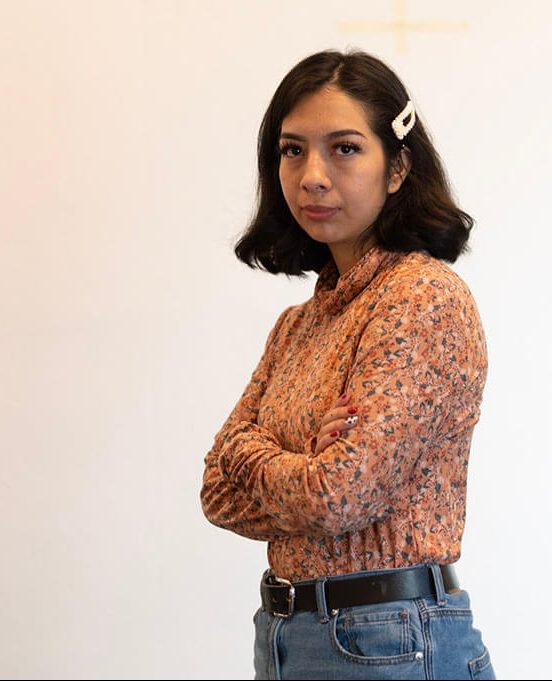 I’m Perla Salazar, a 18-year-old Latina. I use she, her and hers pronouns. I am currently a senior attending South Medford High School. I have plans to be a social worker, along with a background in environmental studies. I am a beautiful mosaic piece that includes being a leader, student, and daughter among many things. I was born and raised along warm beaches, and sand in Nayarit. I moved to the United States starting 3rd grade.

Some of my strengths include being able to communicate with a larger audience due to my background in theater. Not to mention being empathetic; building connections with people, and understanding them is something I believe to be very important. My style is often referred to as “old lady”. I’m very outgoing and I stand up for what I believe is righteous. I am hungry for challenges, activities and experiences that will enrich my toolkit. Whatever I place my mind on, my heart follows, and that is probably the most important part of me that I would like people to know. Thank you. 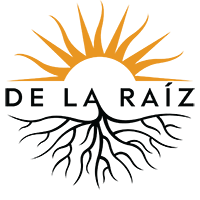